What a Christmas Trip 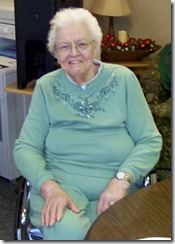 Back in Florida after quite the trip.  Here are pictures of of Gary’s Mom and Leeanne’s Mom and Sisters.  It was great to see family and friends and celebrate Christmas.  On the other hand, the trip totaled 3,200 miles, 14 nights in 5 different motels, and a traveling kitty who was so confused that she was bouncing off the walls almost every night.  And we were chasing to many appointments with doctors, dentists and others.  We still mainly to date have viewed Detroit as “home” even though we became residents of Texas and have been traveling the country.  But on this trip we were really looking to get “home” and this time home was the motor home. 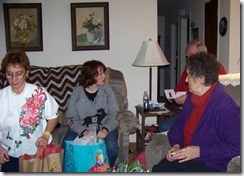 The weather in the midwest was relatively mild, but it really is nice to be back in sunshine and 75 degrees.  But we will always cherish our moments with family.

Away in a Manger, No Crib for a CAT?

On the way to visit Gary’s mother we drove by a church with a manger scene out front.  Something didn’t appear quite right.  Seems the neighborhood stray cat had taken over for the Baby Jesus.  And this was the second time we had driven by there and the same cat was there both times.  Not sure what the kitty did with Baby Jesus.  Hopefully, they just weren’t planning to put him in there until Christmas Eve. 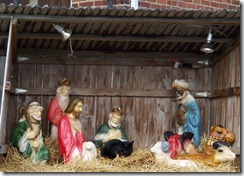 Posted by The BooneDocks at 9:49 AM No comments:

What is that WHITE STUFF and why is it on our RENTAL car? 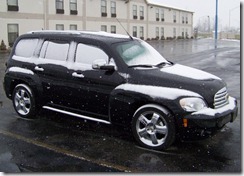 After arriving in Indiana, this past Saturday we went out in the morning and were greeted to this light coating on our car.  Not that it is surprising at this time of the year, but after having spent a very warm month in Florida it was a rude awakening.

And the rental car, well that is a long story.  It seems Gary lost track of when the Boone family Christmas would be held.  He was thinking Sunday even though he had been told it would be on Saturday.  In his defense, it was all discussed during Andy’s wedding and that may have been a time when he was thinking about quite a few other things.  So instead of three driving days of about 400 miles each, the trip north had to be changed to one of 400 the first day and 800 the second (our first day was already locked in and couldn’t be changed).  And from the very beginning the noise from the rear end of the car seemed a little louder than usual, but we wrote that off to the fact that the cheaper set of tires had been rotated to the back just before we left.  But when the hum kept becoming a little louder, it seemed there might be another explanation.  For awhile, an exhaust system leak seemed like a potential answer, but that wasn’t it either.  In Kentucky, the hum became a bit more like a roar, but you couldn’t hear it at low speeds, only at road speed.   We risked it for awhile and finally made the decision that if we could get to Indianapolis we would drop the car at a dealership and proceed on in a rental car.  We were able to get that far and carry out that plan, transferring almost everything with us from car to car, including the cat, who proceeded to escape into the parking lot for awhile during the process.  A day of driving that started with us getting up at 5:30 AM finally arrived with us arriving at our motel at 11:30 PM.

The car was repaired on Saturday.  It was a rear wheel bearing going bad.  And after our gathering, we returned back to Indianapolis and picked it up and turned in the rental car.

Christmas at the RV Park 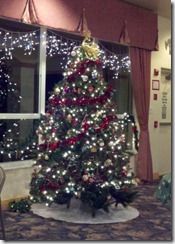 It seems a lot of people at the RV park will be traveling during the holidays so the park had an early Christmas pot luck dinner last night.  As this is an ownership park and a lot of the owners have small dwelling other than their RV’s, the park is far more decorated than one would expect at a campground.  The Christmas tree in the clubhouse was especially pretty.  One couple has tons of decorations in their yard and had a lighting party. 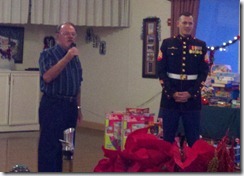 Our holiday party included an element of charity as well.  The Marine Corps in the Space Coast area was this year’s sponsor for Toys for Tots.  Here is our Marine representative and who attended our dinner. 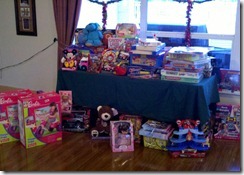 It was quite the haul for Toys for Tots. The residents and guests of the park were very generous with their gifts.

Posted by The BooneDocks at 3:44 PM No comments:

Christmas Baking in the Motor Home

Just because we are living out of a motor home, doesn’t mean Leeanne isn’t going to bake

Baking has been a bit of a challenge as she is now using a convection oven rather than gas oven and for some recipes temperature and time adjustments are necessary.  And the temperature settings of the oven proved not to be accurate either.  But she has it down.  I have sampled every batch and they are yummy!

After three tries, she also now has perfected a scaled d

own Boone-family  pound cake recipe in the North Carolina pottery cake pan.  We tried it out on some of the neighbors here at the park and it was a crowd pleaser.  She will bake one this week to take north for the Boone family Christmas.

We are heading north on Thursday in the car.  We will take three days to make the 1,100 mile trip to northern Indiana.  Then will be on to Detroit and Columbus, Ohio.  We have been watching the weather.  It’s going to be quite the shock to go from daily 70’s to lows that have been in the 20’s.  We’ll have to dig out the winter coats, hats, and gloves out of the basement of the motor home.  Alley has already grown her winter coat.

A Day At The Beach–Ooooooops! 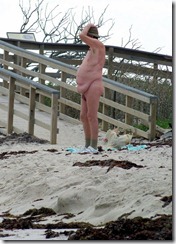 Yesterday we decided that we should explore the local area a bit more and make our first trip from our RV park out to the ocean and the beach.  We drove out on to Cape Canaveral and went to visit the Canaveral National Seashore.  We went all the way out to where the access road ends and planned to explore our way back.  We parked and went on the stairway over the dune and right there at the end of the walkway was quite the surprise.  As we walked on down the beach there was a couple sunbathing au naturel.  And as we continued on we saw that a man was walking toward us wearing just a t-shirt.  There was a stream of people on down the beach that in all likelihood were fully enjoying the sunshine as well  Exit u-turn and off to another area of the beach.   We had to snap one picture.  Shouldn’t this one have been wearing some clothing?

Posted by The BooneDocks at 7:49 PM 4 comments:

These days we have been enjoying the warm weather of Florida, getting back into a regular exercise routine through the morning exercise tape at the park clubhouse, getting to know our many nice neighbors at the RV park, playing a little golf, and enjoying a great simple pleasure each morning – fresh squeezed Florida orange juice.  There aren’t many things we have needed so far that we didn’t pack in the motor home, but a juice squeezer is one of them.  And I am not sure we even had one in our home in Michigan.   Ah, it sure does taste great!

Posted by The BooneDocks at 8:30 PM 2 comments: 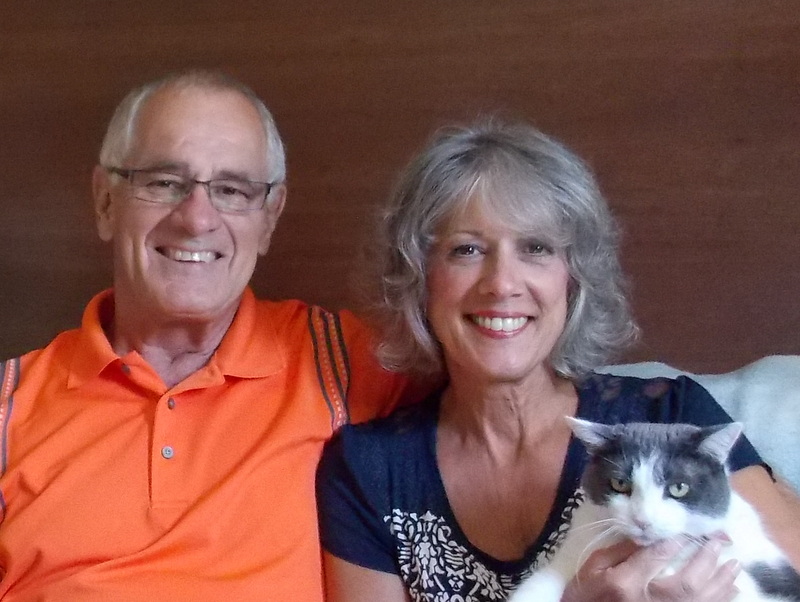